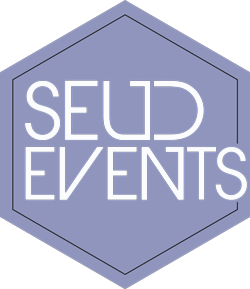 Hysteroscopy:
Surgery of the XXIst century
March, 24th & 25th, 2022
Dubai, United Arab Emirates
Get your CME credits and your certificate of attendance

SEUD is organizing its first Workshop “Hysterospy: Surgery of the XX1st century” on March 24th and 25th 2022, in Dubai.

Thanks to a prestigious international faculty, you’ll be able to join an exciting program with experts lectures on guidelines of structural and non-structural HMB, updates and training on minimally invasive surgery.

Most importantly, a dedicated hands-on session will be organized giving you access to simulators to improve your surgical skills. 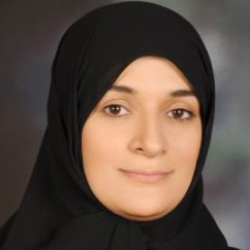 Dr. Fatema Al Hajeri is a consultant Obstetrician & Gynaecologist at Saudi German Hospital in Dammam and beforehand at Al Cornich Hospital. Dr Hajeri undertook her training at the Arabian Gulf University qualified in 2001. In 2005, she undertook a postgraduate training programme for Saudi board at the King Fahad University Hospital. More recently, she has also qualified with a diploma in Obs&Gyne ultrasound at the University of Cardiff, a bachelor in endoscopy (2019) and in 2020 achieved a certification in minimally invasive gynecological surgery from EAGS.

Throughout Dr Hajeri’s postgraduate training and consultancy, she has lectured and chaired at many local and international workshops including conferences covering minimally invasive surgeries.  During her postgraduate training, Dr Hajeri was an active trainer of advanced life support in obstetrics and gynecology.

Dr Hajeri is an advocate of the ‘see and treat – one stop approach’ and was one of the first team users of Myosure and Novasure at Corniche Hospital in Abu Dhabi and she is now member of the Saudi board for Ob Gyn (SBOG). 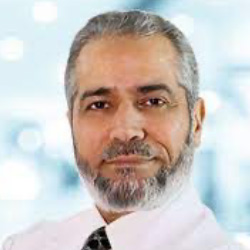 Alongside his clinical services, Dr Al-Rumaih has been an active trainer and lecturer in reproductive medicine since 2002. He is a member of both the royal college of obstetricians and gynecologists (UK) and the European society of reproduction and human embryology. 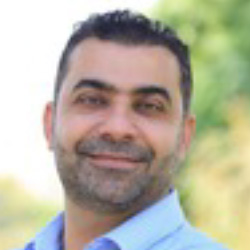 Dr Mazen Bishtawi is a consultant Obstetrician & Gynaecologist and director of women’s services at Al Ahli Hospital. He undertook his medical training at the University of Jordan and was awarded in degree of high specialization in Obs&Gyn in 2002. Since, he has undertaken a number of fellowships and qualifications including; FACOG, FRCOG, FICRS, EDOE, RCOG, BSCCP. He is an experienced surgeon with over 20 years of experience in treating gynecological disorders. During his role as senior consultant in Amman/Jordan he covered all emergency procedures across the main private hospitals.

Dr Bishtawi is an active member of the medical education and scientific research community. Over the past 10 years, he has delivered many national and international presentations as well as conducting workshops in obstetrics and gynecology including training office on behalf of the Jordanian British Society. He regularly attends courses covering topics from medical education to advances laparoscopy.

He has published many papers and is a current member of the editorial board of annals AlqudsMedicine Journal and administrative committee of the Jordanian British Society in Obstetrics and Gynecology. Alongside this, he is the elected member of the representative committee for RCOG representing Jordan, Palestine and Syria. 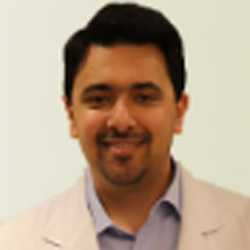 Dr. Haitham Felimban is a consultant Obstetrician & Gynecologist at Security Forces Hospital Program (SFHP) in Saudi Arabia. He specialized in minimally invasive robotic gynecological surgery and is the deput director of the Resident Training Program in SFHP.

Dr Felimban completed his medical training at KAMC, Riyadh before undertaking his specialty in Gynecologic oncology at Asan Medical centre under the guidance of Prof. Joo-Hyun Nam and Prof. Yong-man Kim. Since, he has completed a fellowship Minimally Invasive & Robotic Gyneco

Alongside his clinical responsibilities, Dr Felimban has presented and spoken at a number of international Gynecological and Obstetric conferences. He has also been a clinical instructor at Al Faisal University and an instructor on the Obstetric Emergency Training Course (OBERT). 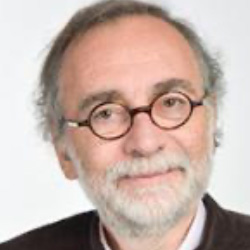 Dr Fernandez is a gynecological and obstetrical surgeon at Bicetre Hospital. Since 2009, he has been head of the gynecology and obstetrics department. Before this, he held a professorship position at Antoine Béclère Hospital within the Gynecology department. He undertook his medical training at UFR Kremlin Bicêtre and later specialized in gynecology-obstetrics at Paris VI. Alongside this, he has undertaken qualifications in Oncology, microsurgery, human biology alongside statistical and epidemiological methodology studies.

Alongside his professional positions, Dr Fernandez is Editor-in-Chief of Gynecology Obstetrics and Biology of Reproduction and Medical-Surgical Encyclopedia (EMC) “Gynecology and Surgical Techniques”. He is a critical reviewer of many international journals and is also an active member of both the College of Obstetrics and Gynecology and the Society of Pelvic Gynecology Surgery. 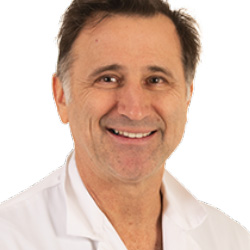 Dr. Laberge has written several articles and given several practical workshops on endoscopic surgery since 1991 in Quebec as well as outside the province. He is a member of the medical advisory committee of Best Doctors Canada™.

Dr. Laberge is also interested in continuing medical education: his interactive multimedia self-learning program on ectopic pregnancy earned him the first prize at APOG in Toronto in 1995. Since 1993 he has been teaching in the form of practical workshops in advanced laparoscopy and has completed preceptorships in operative hysteroscopy and laparoscopic hysterectomy in Canada and Europe.

Dr. Laberge is actively involved in clinical research in gynecological endoscopy; he received the Robert B. Hunt award for the best scientific publication in the Journal of the American Association of Gynecologic Laparoscopists in 2003. He was president of the scientific committee of the pan-Canadian study on. 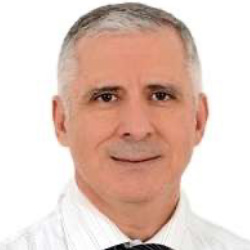 Dr. Ghassan Lotfi has more than 27 years of experience in the field of obstetrics and gynaecology. He achieved his Diploma in General Medicine and a Specialized training in Obstetrics and Gynecology at I.P Pavlov University and a specialised training in Gynecological Oncology at N.N Petrov University in Russia. During this time, Dr Ghassan also completed postgraduate training in practical hysteroscopy and modern hysteroscopy.

Throughout his 20 years of service in Scandinavian countries he received the Swedish, Finnish and Norwegian OB/GYN Board. Since 2010, Dr Ghassan has been working in private and public hospitals in UAE and is currently the head of the women’s department at the Saudi German Hospital. Here, he has helped build a service of excellence in minimally invasive surgery in DHA and has been accredited from the American Association of Gynaecologic Laparoscopy. 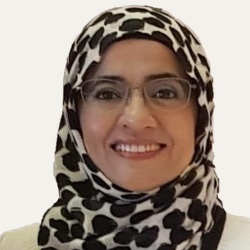 Dr. Sadia Malick is a consultant Obstetrician & Gynaecologist at Northwest Clinic, Jumeirah Dubai with over 25 years in treatment and management of gynecological disorders. She completed her medical training in the UK where she also undertook postgraduate training in early pregnancy, acute gynecology and advanced hysteroscopy and began working as a consultant in the UK. Dr. Malick is currently working in Abu Dhabi at the Corniche Hospital, where she has since become the Lead Clinician for the Early Pregnancy, in which she has established the first Recurrent Pregnancy Loss Clinic at the Hospital, following international guidelines. Dr. Malick also specializes in abnormal uterine bleeding management, as well as advanced hysteroscopy procedures, with and without anaesthesia.

In addition to her clinical accomplishments, Dr Malick is an active member of the scientific research community where she has published several papers in renowned journals covering both gynecology and obstetrics. Dr. Malick has also presented her research at a number of national and international conferences including the 2021 RCOG annual conference. She has been recognized for her achievements through the women’s leadership award form the women leadership congress. 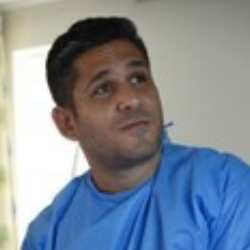 Dr. Hani Shuheibar is a consultant Obstetrician & Gynaecologist at Manchester University Foundation Trust Hospital. He undertook his training at the University of Manchester and qualified in 2005. In 2011, he also qualified with a diploma in Sexual Reproductive Healthcare. He obtained his membership for the Royal College of Obstetricians and Gynaecologists in 2012 and in the same year completed his post-graduate qualification in Medical Education.

Dr Shuheibar is an advocate of minimally invasive gynacological surgery including management of chronic conditions, such as endometriosis. In addition, Dr Shuheibar runs a weekly outpatient hysteroscopy clinic including both endometrial ablations and resection of polyps and fibroids. He spearheaded a training programme, advanced laparoscopic course in gynaecology, which has won 2 awards for innovation.

Dr Shuheibar has taken an active mentor role throughout his various roles; he is currently an instructor on local PROMPT courses, a clinical lead for the Manchester-Gulu Link ICL programme delivering education and training to Gulu university medical students and has trained 4 trainees on bening gynaecology ATSM. He is also an active member of the British Society of Gynaecological Endoscopy and the British Medical Association. 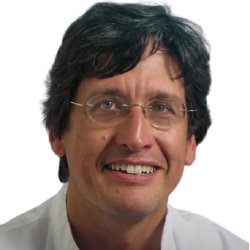 Dr Thurkow is a consultant gynecologist at the Bergman Clinics | Woman and the AMC (Academic Medical Center) & Amsterdam University with over 30 years of experience in development of gynecological endoscopy and minimally invasive surgery (especially hysteroscopy and laparoscopy). He undertook his medical training at the University of Groningen and then specialized in Obstetrics and Gynecology. In his work, he focuses on minimally invasive techniques in gynecology, for which patients from all over the country are now referred to him, especially for the more difficult cases.

In his previous job at the OLVG West, he trained many international gynecologists in minimally invasive treatments and therefore, become a real Centre of Excellence for these types of techniques. In both roles, he regularly uses both NovaSure and MyoSure technology.

Alongside his clinical roles, he holds many professional memberships including: advisory board member for ESGE, Editor-in-Chief for Webforum ESGE, chairman of ESGE communication section alongside many other board and professional roles. He is also name principal investigator on a number of studies and has published many articles.

Apply for a registration
Registrations are under application. Seats are limited and reserved to Gulf countries physicians.
Take a look at the program
CONGRESS VENUE
GRAND HYATT DUBAI
Sheikh Rashid Road,
Dubai
With the support of