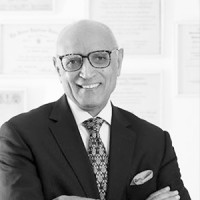 Professor Gamal Serour is a professor of Obstetrics and Gynaecology, Director for the International Islamic Center for Population Studies and Research (IICPSR) at Al Azhar University and Former Dean of the Faculty of Medicine Al Azhar University.

IICPSR is the Laureate of the United Nations Population Award (institutional category), 2013 for its outstanding work to promote reproductive health and population studies in Islamic countries.

Professor Serour established the first IVF & ET Center in Egypt in 1986 and delivered the first Egyptian IVF baby in July 1987. He established Al Azhar ART Unit in 2004. The unit conducts an annual international workshop on “Hands on training in ART for the developing world” and provides service, training and research activities in ART for developing countries.

He has been invited as a keynote speaker in a large number of national, regional and international conferences including ESHRE, ASRM, IFFS, and JSRM. He was invited as a speaker to the High-level Dialogue on Interreligious and Intercultural Cooperation for Peace at the UN General Assembly meeting on October 4-5, 2007, High-Level Interactive Debate on “The ICPD Beyond 2014 and Human Progress and Sustainability 4th April 2014.

Professor Serour has authored and co-authored over 370 papers published in International, regional and national journals, 30 chapters in international books, and edited and co- edited 18 books. He is a referee for international Journals in Human Reproduction, Ethics and Population Policies.